Samaj Development Foundation (SDF) was formally registered in April 2011. SDF is a not-for-profit, non-governmental organization, registered under societies act 1860, aiming to strengthen the process of socio-economic development and empowerment of the deprived sections of the society at the grassroots level through transfer of Knowledge, Social mobilization ,Awareness ,Capacity building ,Advocacy and Networking without ethnic, political, religious or any other biases. We believe that the sustainable solution to perk up the communities by developing their ability to mobilize ,organize, manage and control local and external resources by themselves.

Samaj Development Foundation (SDF) in fact was effort by a group of young motivated volunteers who had vigorously worked with the victims of July 2010 torrential rains and floods ,caused severe and unprecedented devastation to the agriculture, public infrastructure, housing and daily routine life in 26 districts of Pakistan including Rahim yar Khan District….

I feel proud to be associated with Samaj Development Foundation working for deprived and marginalized communities. It is our belief that every human has equal rights. Every person has right to live with dignity and respect. Our beloved country came into being with a commitment to provide equal rights to every citizen despite of race, creed, color and religion.
As a nation, it’s moral duty of every citizen to work for the basic rights of common people to create harmony in the society for a prosperous homeland. Lets join hands together to eliminate discrimination, promote peace and harmony and that is the vision of our organization.
Further, I am grateful to partner organizations, stakeholders, community members and SDF team for their continuous efforts and contribution for gracious deed. I am confident, SDF will continue its efforts with same zeal and spirit. 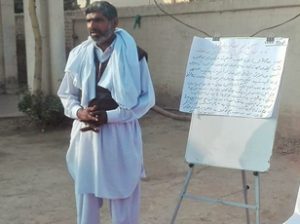 Mr. Talib remembers the days when the people of his village wanted to offer their prayers in mosques but they didn’t due to conflict related to sectarianism.

Mr. Talib Hussain belongs to Patti Wala village of district Multan. This village contains people of different sects, including Shia, Sunni, Barelvi and Deobandi. They have a common Mosque in their village. The people of the community had a continuous conflict on offering prayers.

Meanwhile, Samaj Development Foundation (SDF) started “Wasaib Amn Kath” project in two Union Council of District Multan. Patti Wala village was also included in the project area. SDF team has established Wasaib Amn Kaths (Village Peace Committees) in Patti Wala village. After the formation of WAK, members of Wasaib Amn Kath attended training sessions and other activities including Social Action Plans, Poetry festivals and sport matches organized by SDF team.  They were well aware about the importance of peace and harmony in the society. Realizing the situation, WAK members took the initiative and all committee members decided to offer their prayers together. WAK Members conducted their meetings and promoted the message of peace in their village area. It has been decided that if a person from one sect will call Azaan then people from other sects will offer their prayers with him. Similarly, if a person from Sunni sect will call the Azaan, other people will offer their prayers with him. All people from the village agreed on this point.

“Islam is the religion of peace and tolerance, so we should respect others even if they belong to other sects and cultures. We have religiously a philosophy of peace and tolerance that don’t allow harm any other person”, shared Talib Hussain. He discussed that SDF team has established WAK Daira in this backward area of southern Punjab and build our capacity in conflict resolving. “This Project has a great impact on our lives. We have resolved our issue by our own efforts that happened due to formation of WAK in our village”, said Talib Hussain.

Like Talib Hussain, many other people from local communities have been associated with WAKs to curb violence and extremism from society. People from local communities are being trained to resolve their disputes at local level by their own efforts. Samaj Development Foundation will continue its efforts for harmonized society where everyone has right to live with respect and dignity.